In our previous blogs, we told you about: 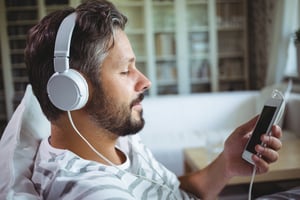 As in our previous blogs related to this topic, it was Alejandro Segovia, our audio producer, who shared this information with us. Here's what he had to say about it:

1. Services a jingle producer should be able to offer

To make a jingle, a whole package should be offered. There are those who ask only for an audio logo, which can be done, but it's best to have music to frame your brand, to help people remember it (whether it's sung or not) What I -Alejandro Segovia- always offer is a package that includes both a jingle and an audio logo.

Now, a Jingle package should include different time versions. Before there were social networks, we had time limitations for our ads; radio and TV commercials were of around 20-30 seconds long. There were those who made a 10 or even 5 seconds long ad! And the music had to be adapted to that short time! Now, with social networks, we can make ads for up to 40 seconds... I've even seen ads that last up to a minute!

So the package I offer includes these versions:

I offer these versions so that they can be used both on social media, as well as on traditional means of communication.

I also include an audio logo, which is usually of 3 to 5 seconds long.

I offer a series of samples of this audio logo, specially when I work with agencies. I can send 2, 3 or 4 samples. The idea is that this logo should be related to the jingle.

Example of a logo audio related to a jingle

That is, usually the auditory logo, unless it's an amorphous sound, a sound that's not musical, rather an effect (which is very rare), the logo must be linked to a musical note, to a sequence of musical notes, and it's preferable that these musical notes are associated with the institutional jingle of the brand.

Benefits of an audio logo

One of the benefits advantages of the audio logo is that you can place it at the beginning or end of your ad, or you can even turn it into a ringtone for cell phones.

If companies turned their audio logos into ringtones and distributed them for free, people would be carrying cell phones that would advertise a brand while ringing. Who are the only ones who do it? Phone companies. They add their music to their cell phones and every time the phone rings, they are advertising their brand over and over and over again.

2. Aspects you should keep in mind when hiring a producer

There are lots of people out there who are involved -or are starting to get involved- in music and audio production. Some are more improvised than others, some are more prepared than others. So, what should a client look for when hiring someone?

For example, jingles from the 80s are very different from what we have now; melodies are now much more direct, much more forceful. In the 80s, we still had some inheritance of the melodies of the 70s, which were very beautiful and could even become very popular songs, such was the case of Coca-Cola.

These days you can't run such an "easy" campaign. Now it must sound forceful, powerful, institutional. The musical language adapted to the advertising and marketing language. And I already experienced all that! I've been in this marketing world for many years now and have this knowledge that only time can bring.

Another thing that backs a producer is having worked with important companies and brands. I, for example, have worked with companies such as:

Or even with governments! I have worked with the Government of Sinaloa, the chamber of deputies at the Federal level in the 60th legislature, the Federal Government during the Calderón administration, SAGARPA... in short, there's much work to back me up and give the advertiser proof that he's hiring a professional.

Something that's hard to find in a music producer is the ability to respond quickly. I have no problem coming up with a jingle in less than 24 hours when needed. I understand that advertising is something that's very changeable and that sometimes, it's urgent to produce something... I am proud to say that there's no one to stop me from doing so.

Where did I get this experience? Especially in political campaigns; those wars between candidates where I had to be producing a lot, a lot of music, from one moment to the other, because the campaign was constantly changing, because the polls were changing ... So one had to work hard, even during the whole nights, for many nights. My responsiveness is something that you will hardly find anywhere else.

The quality of my productions is foolproof. I have invested a lot of time, money and effort in achieving a high quality sound, meeting the standards that the industry demands. My quality standards are very good, not only in radio and television, but also in the records industry.

The equipment is important yet, we must be aware that there's been a miniaturization of tools and new software and apps have being created, so we can now carry a whole recording studio in a suitcase that provides the same results (or even better!) as we had before (when we had a huge studio, lots of recorders, keyboards and such). We can now do it all on a computer. Now, having the necessary equipment for music production is not enough, the producer must also have the know-how and the experience needed to successfully implement these tools.

It's important to back the producer's career with his experience in the music industry. There's a question that I've been asked, from businessmen to Uber drivers. They all ask the same questions which are:

Here are the names of some people I've worked with:

And I must share here some news that make me very happy; I was recently admitted in the Latin Grammy Academy.

What you basically want to do, is to identify if the producer is a real professional and not just someone who is improvising.

This issue is very important! It's something that I always give to my clients, whether they ask for it or not. Each jingle they ask and pay for, I deliver and they own it.

Many years ago, producers of jingles, especially in Mexico City, made contracts with the agencies and clients so that, after a year, the latter had to pay the producer a fee that amounted to almost the total of production.

At any given moment, and if the case should arise, the only right that the creator keeps is the moral right. What does this mean? That if you hire me to make music for a documentary, you'll have to put my name in the documentary's production credits. But the rights belong to whoever paid for the production. The only right that I keep, is the mention of my credit. If it's an ad, which has no credits, it's obvious that no credits are expected to be shown but, whenever there are credits, the only right that the author keeps is the moral right to have his name shown there.

Long story short, all of my productions are protected by a copyright that favors my clients.

If you want to learn more about audio production and the services that we offer at DataBranding, with the collaboration of Alejandro Segovia, Contact us!

Does Your Company Need to Have Its Own Jingle?

In our previous blog post, we talked about what a jingle is and how it can help you sell your brand...

Making an Musical Album: How a Professional Works

On this blog post, Alejandro Segovia, our friend and audio producer, member of the Latin Grammy...

What studio services does DataBranding offers in collaboration with Alejandro Segovia? Alejandro,...