Why Should You Have a Podcast? 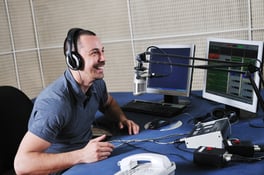 This article was originally published in Spanish at HubSpot's blog.

Audio is one of the most powerful content formats. Although it isn't as broadly used as videos or as written content, it has the ability of creating a much more captive and commited audience, one that the habit needed in order to listen to -and ask for- more.

In a not too distant future, audio content will be recognized and indexed by search engines such as Google. When this happens, all of those who have been producing this kind of content for a long time, will be rewarded and will have an upper hand in this medium.

What is a Podcast?

I must start by describing what a Podcast is. If you've ever listened to a radio show, then you already have an idea of what it is. It is an audio transmission that is made periodically and revolves around a predetermined topic.

Podcasts are different from radio shows since its transmission is not subjected to a specific space or radio station. People can subscribe to a podcast and receive a notification when new material has been published so they can listen to it whenever and wherever they want to.

They can listen to it on their mobile phone, tablet, computer or audio player, that is, they are not tied a specific device. In addition, they can do this using several distribution channels such as i-tunes, Soundcloud or Stitcher, to name a few.

Thanks to its i-pod and i-tunes software, Apple was the first company to make this possible. They were the ones who named this kind of transmissions Podcasts, since they would be listened to with an i-pod. Hence the compound word: Pod, from the i-pod and cast from broadcast (broadcasting for my i-pod). Apple also wanted to expand the use of the podcast to video, so there are some podcasts that may include still images or video, but the use of these hasn't become so popular.

Why Should you Have a Podcast?

The first sense that we develop -ever since we are in our mother's womb- is hearing. This sense has the closest connection to the brain. Actually, many scientists claim that sound has a direct influence in our subconscious and our psyche. If you do not believe this, then tell me why can we relate emotional characteristics to a sound expressed in notes. We can describe a certain music as sad or joyful, it can give us energy or put us down. Sound has this power that no other means has.

It is due to this characteristic that sound has, that it has become a very important mean to change the mind of whoever is listening to us. Thanks to this magical and direct connection that sound has with our brain, we can have a direct influence on people's subconscious, psyche and reason.

It also has the limitation that it can only be transmitted through sound waves, but this limitation also becomes one of its main strengths, since it allows us to carry out other activities while we are listening to the podcast. We do not need the other senses to be able to use this media.

Audio listeners will probably consume our content while doing something else, such as exercising or driving their car to work -and back home as well. So if they like the material that is being produced, it will become a habit for them not only to listen to a chapter of the podcast, but they will listen to several of them and, believe me, they will become addicted to its content.

Now, it is not a mean for everyone, but whoever manages to get in touch with his audience based on this media, he will not only have a lead or a client, he will have a promoter and an evangelist of the ideas presented in the contents.

Another incredible feature of audio is that it may turn into an intimate relationship between the speaker and the listener. This allows three things to be generated: familiarity, empathy and projection. Which marketer doesn't want to achieve these three things with his ideal client, target audience, or as we say in inbound marketing, with his buyer persona?

3 Things a Podcast Generates in your Potential Clients

It is important because it builds trust. People will only buy from the people they trust and know. Listening to a podcast generates such familiarity with the speaker and his ideas, that a "friendship" is created. The person that we listen to gives us a sense of trust because we can read more messages with sound than what's being said only with written words.

This is the meta-communication that a voice can share by providing an additional message to the word. It is so powerful that, based on the sound of a voice, we can get to know a lot about a person, such as: age, level of education, geographic region or origin, state of mind and psychological state. Look at all the information that a voice can gives! This is why it can give us a sense of trust and familiarity, or quite the opposite. A written text doesn't have this kind of magic.

We can make listeners to put themselves in the situations that we are describing and in their imagination, they can become the story's main character. Imagine the power of creating a story with a customer who has a problem and describing to him how we solved that same problem with our product or service, better than our competition did. All of this while the listener became the main character and lived the experience with his imagination.

When we put on our headphones, that sound that we listen to becomes an internal dialogue, as if the voice that we are listening to, came out of ourselves. It is the best way for people to take ownership of the ideas that we share in our podcast. We psychologically succumb to that voice and a weakening of the "I" happens. This makes us lose the sense of the relation between the fictional and the reality.

This is why when sharing our ideas with a podcast can generate a true echo in the mind of the person who listens to them, to the point of adopting this ideas as his, as if they had been his own from the very beginning.

It is for all these reasons that a Podcast is perhaps the most dynamic and strong medium of all marketing content formats.

The Growth Show: HubSpot Podcast to learn how different companies leaders have managed to grow and become successful.

The Mad Marketing Podcast: Listen to the most important marketing questions that arise these days.

If you still don't have a Podcast, what are you waiting for? Start creating your won podcasts and take advantage of all the benefits that we mentioned before. If you need professional help with this, feel free to contact us. We'd be happy to help.

How to Make a Podcast?

This article was originally published in Spanish on the HubSpot blog. If you are not subscribed to...

Most Popular Sales Methodologies and The Importance of Choosing One

What is the difference between a Sales Process and a Sales Methodology? A sales process is a set...

You have a medium-size company and the competition is huge. You don't have the same resources a...